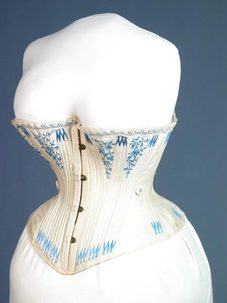 Corset with 2-Part Busk
c.1870
The Corset
This period gave life to the corset most people think of when they hear the word. It’s heavily boned, has a busk down the front, and laces up the back. It may, or may not, have had shoulder straps. After 1828 they might have had metal grommets, which allowed for them to be tightened more and more, and they then began to be used to severely alter the natural figure. The fashionable waist drops, and gets smaller and smaller during this time period. In 1829 the 2-part metal busk is introduced and by the mid-Victorian era has become common; For the first time corsets do not have to be completely unlaced to be removed, only loosened enough for the busk to be popped apart (and they are now criss-cross laced like a shoe to allow for this type of removal). But do not imagine that these are now an easy in/easy out garment. Getting back in is a chore, so women are still not going to be removing these in semi-public places. In the late 1870s and early 1880s the Emancipation Waist has its heyday, mostly among the suffragettes we all love to write about (use it!). There are lots of films to look at: Impromptu, Cousin Bette, Original Sin, The Piano, Possession)

Full underthings
c. 1880s
The Rest
During the long period which is the reign of Queen Victoria, fashion changes A LOT. There is always going to be some kind of garment under the corset. Early on it will be a shift. Later it might be a camisole and slip, or a “onesie” cami-bloomer combo. Over that will go one or more petticoats (some 10-14 pounds of them by the 1840s!). In 1856 the crinoline (hoop skirt) is invented, and women trade in their heavy petticoats for this lightweight cage of metal, bamboo, or stiffened horse hair. As the century wears on a whole line of different kinds of crinolines (hoops, bustles, and tonnures) are created, depending on which years you’re setting your book in. Women will all be wearing crotchless bloomers, and knit stockings of cotton, wool, or silk. These were held up with garters tied above the knee, and than later (1878), with clips from the corset (like a modern garter belt).