No Rules for Rogues 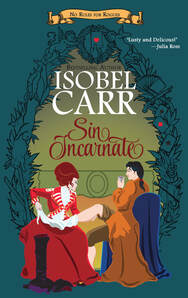 Six Nights Of Pleasure...Georgianna Exley's passionate nature has always been her undoing—and for this reason the beautiful young widow allows her lovers only a single night in her bed. No man will ever have the right to dictate to her; to presume he owns her. But Ivo Dauntry has at last come home to England, and for he'll settle for nothing less than one night for every year he’s given up for her...and soon, his daring seduction becomes a sensual contest of wills Georgianna is all too willing to lose. But the long-ago duel that bound them forever has repercussions neither of them could ever have foreseen, and once again, Ivo must risk everything, this time to save the woman he loves…
​
Buy Now (or read for free if you subscribe to KU) 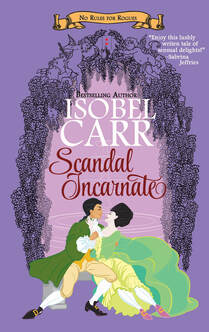 “With her witty dialogue and tender moments, Carr draws readers into her marriage of convenience plotline that delves into what happens when the couple falls in love and then struggles to build a strong marriage against the odds. It’s a lesson all can savor.”

A Shocking Scandal…Gabriel Angelstone, handsome scourge of the ton, has taken one of life’s lessons to heart: Love ruins everything. But the irresistible challenge of seducing the Portrait Divorcée, a woman whose past is every bit as scandalous as his own, quickly has him rethinking that conclusion. The last thing the Imogen Mowbray needs is to have her name connected to that of the equally infamous rake known as Brimstone, but the infuriating man has made it very clear that he’s bent on nothing less than her complete surrender. Rich widows take lovers. Poor divorcées become mistresses. And those with powerful families tread carefully, lest they incite their family’s wrath, a tragic outcome Imogen is all too familiar with…

Buy now (or read for free if you subscribe to KU) 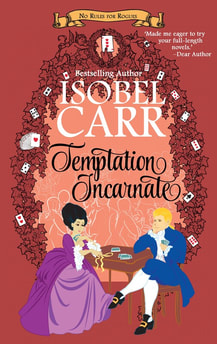 Temptation Incarnate
​A No Rules for Rogues Novelette

"As a appetizer...It has sparked my interest and made me eager to try your full length novels. Jane has written posts about how give aways and freebies can increase sales. Here is a perfect example of that."
--DearAuthor

An impossible challenge … Eleanor Blakely is all too aware that her reputation dangles by a very slender thread, unfortunately, she’s found herself in the midst of a delicious series of wagers with a consummate charmer, and she can’t seem to stop herself from saying yes to every wicked proposition. Whatever twist of fate has kept his best friend’s sister on the shelf is a mystery to Viscount Wroxton, but when the inveterate little gamester suddenly catches his attention, she’s entirely is too fascinating to ignore. The fact that she has five enormous brothers is hardly worth thinking about—she’s thrown down the gauntlet, and he has no intention of losing, whatever the cost…

With  a bonus short story, Three Courtesans, which was originally written as a blog post for the Twelve Days of Christmas (I got Three French Hens).