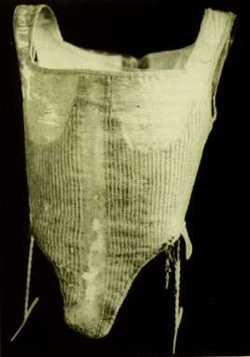 Pair of Bodies
German, 1589
The Pair of Bodies
Corsets during this period were called a pair of bodies. They generally have shoulder straps, and end either at the waist or have tabs which go just below the waist (which is more comfortable). They are “boned” with whalebone (which is really not bone at all, but baleen), reeds, or may have been merely “corded” with lots of tiny channels sewn in to provide the necessary stiffness. They were not super tight, and were not designed to pull the waist in, but to flatten and lift the breasts, giving a smooth, tube-like appearance to the torso.

There are only two extant examples, one laces up the back and one laces up the front, both are from the very end of the period. To the left you see the extant pair from Germany. They are dated to 1589. The other example is known as the Effigy corset and you can see an amazing reproduction of it on Drea Leed’s site.  To get out of either of them though, your dress and other underpinnings had be removed (and they were spiral laced, not cross laced like a tennis shoe). The movie Shakespeare in Love shows these quite well. 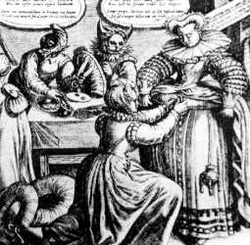 The Rest
Under the pair of bodies the lady would have worn a shift/chemise of fine linen. On top of it she would have had a Spanish farthingale (cone shaped hoop skirt) and bumroll (a large, padded three-quarter-moon worn tied around the waist to hold out your skirts), or a French “wheel” farthingale (post 1560) and bumroll (to support the wheel). She would not have worn drawers of any kind. Contrary to what you see at Renaissance Faires, there is no evidence that women wore bloomers (by the LATE 16th century, drawers were just being adopted in Italy, and it would be centuries before they were worn in England). She would have worn thigh-high stockings, most likely woven, bias cut ones, held up with garters tied above the knee. Knit stockings did exist, and were known to have been worn in Ireland, and a pair of knit silk stockings were an especially treasured gift of Elizabeth I. If your lady has a pair, she’s over the moon about them.