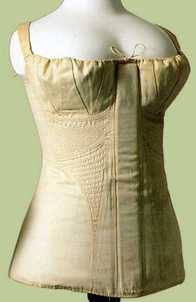 Both stays and corset were in use by the Regency, with corset quickly supplanting stays as the modish term. The main form was a long lightly boned long-line one such as the one shown to the left.  These stays were frequently constructed with minimal boning (only at the seams and center back). Every example I’ve seen during this period had shoulder straps and laced up the back. They usually have a busk as well, just like their 18th century predecessors. For good examples of the period’s underwear see the BBC’s productions of Pride and Prejudice (the Colin Firth version) and Wives and Daughters.

There are shorter examples in many museum collections and in illustrations from the period. As far as I can tell, these are the Regency equivalent of loungewear. Per the period beauty guides I’ve read, they were for sleeping and casual mornings about the house, not for wearing under gowns. 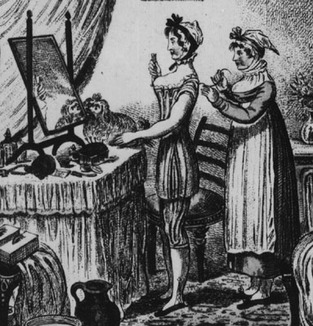 Under the corset, the lady would have worn a shift of fine linen (they’re almost exactly like those of the previous century, but the sleeves are shorter or they are sleeveless).

Then she would have added a single petticoat, most of which resemble a sleeveless jumper and simply tie shut at the back.

Most women during this period did not wear kinckers. About 1806 this began to change. Some women began wearing pantaloons of flesh colored or pink stockinet that went to just below the knee, but these were by no means a commonly adopted garment. The lack of underwear was a phenomenon so common it was even noted in the political cartoons of the day (such as Exhibition Stare Case by Thomas Rolandson). Knickers were considered extremely “fast” when they came in, and were not really accepted until the late teens or early twenties. Even then, they were crotchless, made as two entirely separate legs, attached to a drawstring tied at the waist.

In the 1820s long pantaloons (sometimes incorrectly called pantalettes) were adopted. These were meant to show beneath the slightly raised hemlines of the era. They quickly went out of fashion for adults, but were retained by children well into the Victorian era.