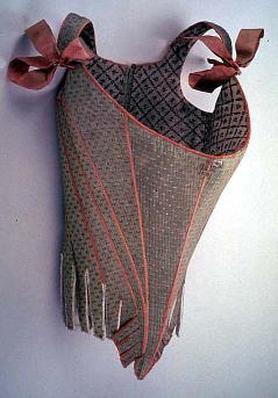 What most people commonly call corsets were known as stays in England during this period (up until the 1790s when both stays and corset were in use). In the 18th century, stays slightly pulled in the waist, but were unable to really re-sculpt the body, as the strain on the fabric would have been too much (no metal grommets yet!). These corsets lift and flatten the breasts, and give support for the hoops, which hold out the skirts (hoops are often referred to as pannier, but this is a Victorian term for them, and was not used during the 18th century). The stays are very heavily boned with whalebone or reed, and usually have a “busk” of wood or bone up the center-front. They almost universally laced up the back, and it was essentially impossible to get in or out of without assistance (some examples also have partial laces up the front, but these are for adjusting the fit). Most examples have shoulder straps, which are designed to pull the shoulders far back, giving a very upright carriage. No one is taking this off at a ball for a tryst, and then getting it back on in minutes. See Glenn Close’s dressing scene in Dangerous Liaisons for a perfect example of these garments, and Amadeus for further examples (and Barry Lyndon if you can stay awake through it; great costumes, agonizingly SLOW film). 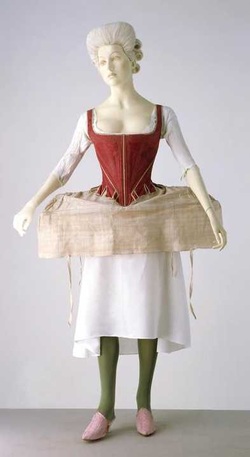 Note stays should be UNDER
the hoops!
The Rest Under the stays the lady would have worn a shift of fine linen (the finer the linen the more expensive; silk was not used for this garment due to the harsh soaps). The shifts were very plain (I’ve never seen any lace on an extant example), but they might have had removable ruffles attached to the end of the sleeves.

Next came the stays.

Then the hoops (which could be the small “pocket” variety for regular wear, small day hoops, or the 4’-5’ wide “court” version for formal wear) or in the 1780s, the bum pad. The stays keep the weight of the hoops and skirts from digging into your hips).

The hoops might also function as pockets, or they might have a slit in the top through which the woman could reach the pockets she wore beneath them.

During this period there are no knickers (yep, they’re all going commando!).