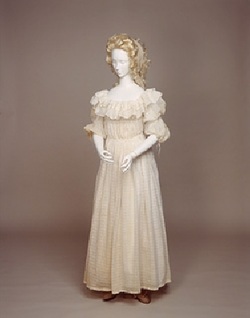 Extant Chemise a la Reine
c. 1783-1790
The 1780s are a transitional period, fashion-wise. The French Revolution is already brewing . . . in just a few years fashion will undergo swift and momentous change, but for the moment we are still in an era of layers, of strict corsetry, and of male elegance. Clothing is, for the most part, very structured. Hoops are on their way out, being replaced in everyday dress by hip pads, though formal gowns and court gowns are still worn over the magnificent hooped petticoats so familiar from depictions of the doomed Marie Antoinette.

Into this world suddenly springs the Chemise a la Reine (also known as the Robe a la Reine and the Chemise dress). Some sources claim it is of English origin, but it is Vigee le Brun’s portrait of Marie Antoinette (in what critics called her “underwear”) that popularized the fashion and gave it the name by which it is still known today.

There are portraits of almost all the leading women of the era wearing such a gown, including the Duchess of Devonshire and Lady Elizabeth Foster. 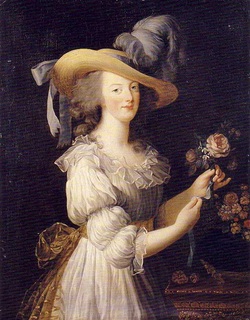 Marie Antoinette, c. 1783
by Vigee le Brun
This is the very first round gown, meaning that unlike the sacque, the contouche and the mantua it is not worn over a separate underskirt, nor is its bodice open, requiring pins or hook and eyes to close it. It goes all the way around the body, pulling on over the head. From extant examples we know that the bodice had a series of drawstrings around it that tied in the back and worked to gather the loose gown in, making it fit the torso and chest. Portraits show that a wide belt of fabric or ribbon was worn round the waist, adding color and drawing attention to the figure.

While this gown would still have been worn over the ridged stays of the day, the lack of hoops and the light fabric’s ability to mould to the body (esp. the legs!) was a revolution in terms of female fashion. It is from this gown that the light and diaphanous gowns of Regency will be born.