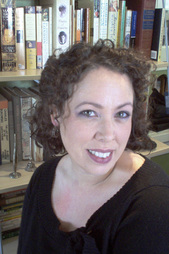 I grew up participating in a wide variety of historical reenactment clubs (California Renaissance Faires, the Society for Creative Anachronism, Heyercon, Dicken’s Faire, Gaskills, etc.). On top of these clubs, my friends and I have recently taken up recreating 18th century fashions just for fun. I’ve spent large parts of my life studying the manners, customs, and clothing of multiple periods (most specifically Renaissance England and Germany, Georgian/Regency England and France, and Victorian England), and I have firsthand experience creating and wearing the clothes of these eras (including the correct underwear and corsets!). Because of my interest in living history, and that hobby’s strong focus on the details of daily life, I have what I think is an unusual and intimate perspective on history. 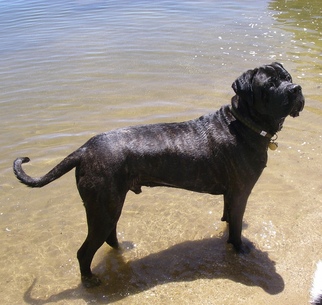 Clancy at the lake
I was born and raised in Northern California, where I still live, in a 1916 California Bungalow with my Mastiff, Clancy (he's half Bullmastiff and half Neapolitan Mastiff, and might be the most well-documented dog ever between the flood of pictures on Twitter and his Flickr set).

Over the years, I’ve taught creative writing, horseback riding, and numerous seminars on historical costuming and food. I can drive stick and start a fire without matches. I can make a soufflé and hitch a team of horses to a wagon (albeit not at the same time). I can spend nine hours in a Victorian corset without a problem, but can’t wear heels for more than four hours. I laughed all the way through every episode of Colonial House, and if I could only watch one movie for the rest of my life it would be Impromptu. When I’m not at the day job or writing, you might find me relaxing up at Huntington Lake, walking Clancy at Point Isabel, or slinging coffee at Burning Man.
Public service announcement: I’m a former Golden Heart Finalist (2005) and I’m here to tell aspiring authors not to take anything too much to heart when it comes to contests. I only got to enter the one time (for which I’m immensely grateful!), but it was an interesting experience. The manuscript that became my second published book finaled, but the one that sold first, and was my debut, got 2s and 3s (and one 8). Yes, that’s right, a book RT, SmartBitches, and even Mrs. Giggles loved scored so poorly in the Golden Heart I was honestly shocked. And lest you think the book that finaled got off any easier, its other contest outing garnered a 36 and a 56 (out of 100) and a judge’s comment I’ll treasure forever: “I loathe everything about your hero.”
Want to know when my next book will be out?  Subscribe to my new release list and I’ll e-mail you as soon as it’s available.
Contact me:
Email: isobelcarr.author (a) gmail.com (sorry, due to hordes of robot SPAM, you'll have to remove the spaces and change the (a) to @).
Twitter: @IsobelCarr (I swear, I live on Twitter)